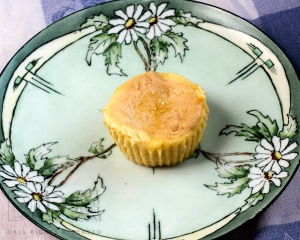 Cheesecake can be a contentious thing. People love it or hate it, and even if you love it you can take multiple sides in the debate: French, New York, topped with all manner of things from fruits to caramel sauce. Etc.

Sometimes the best way to try something is to pick the simplest version, because to my mind, doing simple well is a real skill. It’s kind of the way I test out the kitchen in a restaurant that is new to me, order something simple. I did just that with a new Italian restaurant, ordered Fettuccine Alfredo. It was sublime which tells me to trust the kitchen because if they can do that well then I can only imagine that they can do the other things on the menu just as well. Happiness.

This is a simple cheesecake recipe, but also sublime. Thank you Martha Stewart – you always steer me in the right direction. Merci.

This is the full recipe, but I just made half.

Preheat oven to 350 degrees. Line four 12-cup cupcake tins with heavyweight aluminum liners, and spray with nonstick cooking spray.
In the bowl of an electric mixer fitted with the paddle attachment, beat cream cheese on medium speed until fluffy, about 3 minutes, scraping down sides as needed.
In a large bowl, whisk together sugar and flour. With mixer on low speed, gradually add sugar mixture to cream cheese; mix until smooth. Add sour cream and vanilla; mix until smooth. Add eggs, one at a time, beating until just combined; do not overmix.
Divide batter evenly among cupcake liners, 4 ounces per cupcake. Bake for 15 minutes.
Cool slightly until cupcakes become concave. In a medium bowl, stir together sour cream, sugar, and vanilla to make the sour cream topping. Place a heaping tablespoon of topping in the center of each cupcake, and spread gently to edges of liner. Top with a bit of raw sugar and return to oven for 10 minutes.
Cool to room temperature on a wire rack and chill in the refrigerator until cold, at least two hours.

That’s Turbinado sugar on the top and it is excellent but not in the original recipe – but do it. And again, the plate is really cool.

*When I half a recipe that has an odd number of eggs, I always go one up – so in this case, I used three.