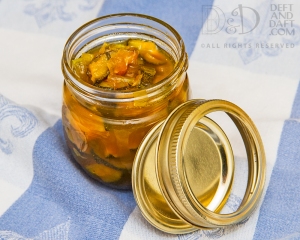 So after the last batch of squash pickles (Oct 2014), I decided I needed to work on the texture of them. Following the Man of the House declaring he liked the flavor, but not the texture. The texture was, how shall I put this, um, squeeky when you chewed them. So they weren’t really like a pickle at all which caused me to look at the method of making them.

Second, taking a lead from cucumber pickles, weigh the squash/onions down while salting/draining them. And consider chilling them with ice while doing this as well.

I went back to the original recipe and read it again. It appears I had been doing this wrong the whole time – for 10 years! I had always sliced the squash in rounds like, well, pickles. But the recipe is squash relish, not squash pickles, and if you read it, which I apparently didn’t, the squash and onions are chopped, not sliced. Duh.

So I actually did the recipe as it was supposed to – finally. I still think I want to come up with a way to deal w/the pickle idea. I was half way there without really trying.

Mix squash and onions with salt and let sit overnight

Drain, mix all ingredients together and boil for thirty minutes.
Put in jars and seal. Can be hot water canned or refrigerated.

This vinegar / spice blend is pretty amazing. I have done this recipe with all sorts of variations  – but keep the ratio the same. Squash to onions to vinegar to sugar.